An exhibition of important monumental works by Henry Moore has opened the Rijksmuseum’s new gardens on 22 June 2013. The exhibition, which includes twelve sculptures, many of which will be seen in the Netherlands for the first time, has been arranged in collaboration with the Henry Moore Foundation.

Highlights of the exhibition include Reclining Woman: Elbow 1981, which has not left the façade of the Leeds Art Gallery since its creation over 30 years ago; Large Two Forms 1966, with open monumental shapes that can be physically entered and provide shifting views of the gardens and architecture of the Rijksmuseum; and Large Reclining Figure 1984, a work Moore enlarged to over 9 meters from a 1938 Surrealist maquette only 33cm long. Of particular interest is Locking Piece 1963-64, in white fibreglass made by Moore to offer a variation to the darker bronze which can also be seen in the Netherlands at the Hague. 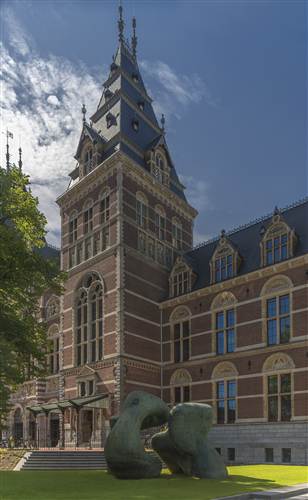 It was particularly in the post-war years that Henry Moore (1898-1986) won international acclaim for his semi-abstract sculptures, often inspired by natural, organic forms. The reclining figure also represents a central theme in the sculptor’s work. The twelve works in the exhibition, in both bronze and fibreglass, explore both these aspects of Moore's oeuvre. The siting of the sculptures is spectacular, set against the 19th century façade of the museum building.

The exhibition is the first in a series of annual international sculpture displays which will be presented in the Rijksmuseum’s gardens over the next five years, made possible with funding from the BankGiro Lottery and an anonymous donor.

The exhibition marks the opening of the Rijksmuseum's new 'outdoor gallery' comprising an area of 14,500m2. Copijn Tuin- en Landschapsarchitecten took architect Pierre Cuypers' original plan for the gardens of 1901 as their starting point for the new design. The gardens include many original features including sculptures, ponds and lawns to which a number of new elements have been added, such as architect Aldo van Eyck's post-war playground equipment from Amsterdam Nieuw-West and a 19th-century greenhouse with heirloom vegetables. A water maze has also been created based on a design by Danish sculptor and installation artist Jeppe Hein.