On 9 June 2016, the Rijksmuseum is organising an international conference on the consumption of early modern prints.

The scholarly research on early modern printmaking has evolved from a focus on the Romantic concept of the Peintre-Graveur to studies of artists and printmakers in their specific cultural and socioeconomic context. In addition, the idea that publishers played a vital role in artistic, commercial and organisational aspects of printmaking is now widely accepted. Both art-historical and art-technical research on these matters have resulted in reference works and exhibition catalogues of high standard. In these studies, however, the position of the consumer has often been ignored or dealt with only briefly. In addition, print collections in the past have often failed to recognise the importance of contemporary adaptations, signs of usage and collecting conditions. 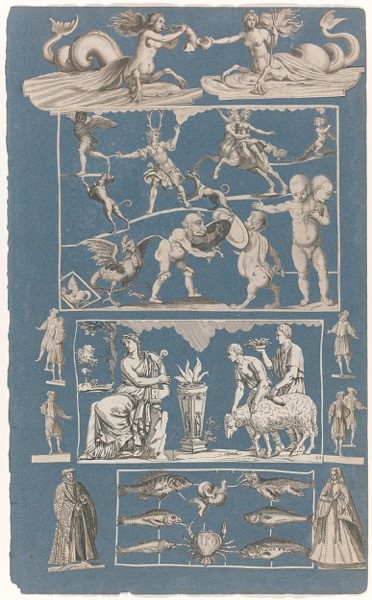 Blue album sheet with cut out prints of various printmakers, ca. 1690-1720However, for a proper understanding of early modern culture, it is crucial to study the consumption of printed images and the socioeconomic and artistic processes behind it. Prints were a widespread and artistically diverse medium and the creative process of a print did not stop after printing. Researching the creative afterlife of prints is therefore an essential development in the study of early modern visual culture. Although the consumption and reception of early modern books has received increasing attention in the past decades, only some scholars such as Jan Van der Stock (Printing Images in Antwerp. The Introduction of Printmaking in a City: Fifteenth Century to 1585, 1998), Peter Schmidt (Gedruckte Bilder in handgeschriebenen Büchern. Zum Gebrauch von Druckgraphik im 15. Jahrhundert, 2003), Jan van der Waals (Prints in the Golden Age. From Art to Shelf Paper, 2006), Kathryn Rudy (Virtual Pilgrimages in the Convent. Imagining Jerusalem in the Late Middle Ages, 2011) and Suzanne Karr Schmidt (Altered and Adorned. Using Renaissance Prints in Daily Life, 2011) have integrated the consumer’s side of the print market and the concrete use of prints in their research.

In order to stimulate this promising evolution, the Rijksmuseum is organising an international conference on early modern prints, ranging from precious artistic prints that were carefully collected to cheap printed images that were used and discarded. Paragons and Paper Bags. Early Modern Prints from the Consumer’s Perspective will take place at the Rijksmuseum in Amsterdam on Thursday 9 June 2016. The aim of this symposium is to further develop this new approach in order to achieve new insights on target audiences, the application and usage of prints, and special collection practices.

On the occasion of this conference, the five print cabinets of the Rijksmuseum will show temporary displays on prints and consumers from the 16th to the 19th centuries. This exhibition will run from 13 April to 3 September 2016.