Sculptures in the Netherlands for the first time

Twenty-one sculptures by the Spanish artist Joan Miró will be adorning the gardens of the Rijksmuseum this summer. This is the first-ever exhibition of Miró's sculptures in the Netherlands. The four-metre-high Oiseau lunaire is making its first public appearance. Since it was cast in bronze in the 1980s, it had never left the warehouse of its commissioning party in New York, until recently when it came into the possession of a private European owner. The Mirós will be on display from 19 June to 11 October in the gardens of the Rijksmuseum, which are free for the public to visit daily from 9.00 am to 6.00 pm. 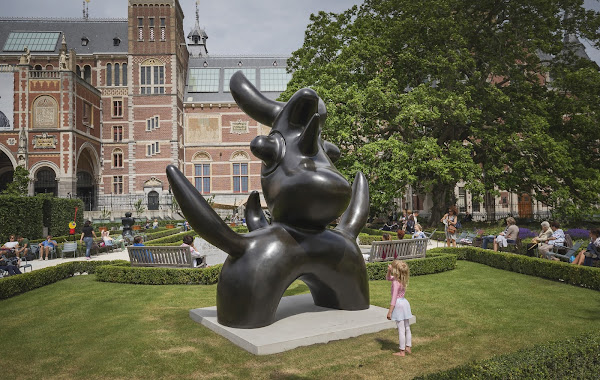 Both a painter and a sculptor

Joan Miró (1893-1983) was brought up in a family of artists in Barcelona (his father was a goldsmith, his grandmother a furniture maker). He is most famous for his dreamy paintings featuring magical figures, animals, suns and stars. His talent as a sculptor is less well known. His range of sculptures did not really get started until after his 40th birthday, but ultimately comprised almost 400 works. 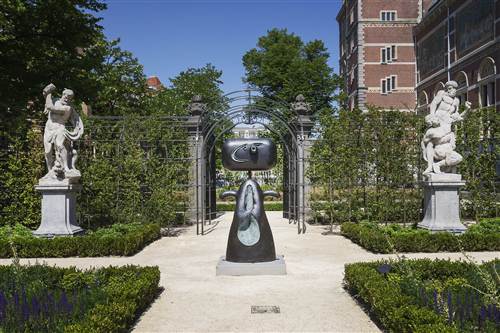 Joan Miró, Femme, 1981. Museum Frieder Burda Baden. Foto: Olivier MiddendorpMiró developed two types of sculptures and examples of both are on display in the exhibition. There are assemblies of objects from nature (stones, tree trunks, roots) on the one hand and from daily life (pitchfork, crane, a mannequin) on the other. But he also sculpted voluminous figures with round and sensual shapes, reminiscent of his painted figures. Miró preferred to work with bronze, which he sometimes painted in bright colours.

Against the backdrop of the neo-gothic museum building designed by architect Cuypers, the Mirós are surrounded by original formal garden styles, historic building fragments and other sculptures. In the 14,500 m2 green gallery, young and old can enjoy the post-war climbing frames by architect Aldo van Eyck, a life-size chess board or the fountain by the contemporary Danish artist Jeppe Hein. Recently, one of the famous PTT telephone booths by Brinkman & Van der Vlugt from 1933 was also added to the outdoor collection. Two 19th-century coffee houses and the new terrace of the RIJKS® restaurant make the gardens around the Rijksmuseum complete.