This autumn the Rijksmuseum will honour one of the founders of Dutch painting: Johan Maelwael (Jean Malouel).

From 6 October 2017 until 7 January 2018 the Rijksmuseum honors the first Northern Netherlandish painter: Johan Maelwael (Jean Malouel, Nijmegen, c. 1370 - Dijon, 1415). This uncle of the legendary Limbourg Brothers was active as a versatile, pioneering and productive artist at the courts of the Dukes of Guelders and Burgundy around 1400. Johan Maelwael became one of the most successful and best paid artist of the Western Europe in the Middle Ages. The show is organized with the exceptional support of the Musée du Louvre that lends Maelwael’s most famous painting 'La Grande Pietà ronde' that has never left Paris since 1962.

Fifty breathtaking medieval treasures – paintings, illuminated manuscripts, precious metalwork and sculpture - will be united in Amsterdam to tell the story of Johan Maelwael. Paintings attributed to the master and his workshop will be juxtaposed with his contemporaries Jean de Beaumetz, Colart de Laon and Henri Bellechose, but also with the sculptures by André Beauneveu, Claes Sluter and Claes van Werve, and with the richly decorated illuminated manuscripts of the famous Limbourg brothers.

The absolute centrepiece of the exhibition will be La Grande Pietà ronde from the collection of the Musée du Louvre. This Lamentation of Christ, painted for Philip the Bold, Duke of Burgundy (1363-1404), combines the subject of the Suffering Christ with that of the Holy Trinity. The round panel, preserved in a pristine condition, is one of the rare works attributed to Johan Maelwael to have survived. Purchased by the Louvre in 1864 it has never left Paris since 1962. The panel will make its first appearance in the Netherlands. Other exceptional loans will come from, among others, the Bibliothèque nationale de France in Paris, The Cleveland Museum of Art, the Royal Library of Belgium in Brussels and The Metropolitan Museum of Art in New York. 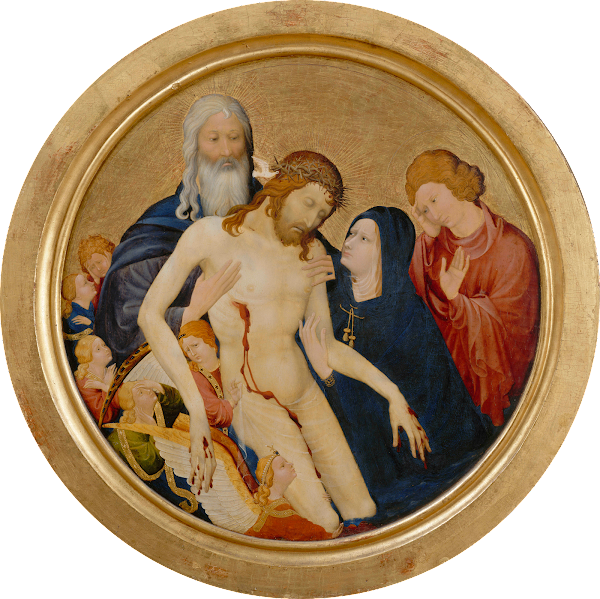 La Grande Pietà ronde, Johan Maelwael. (Nijmegen, c. 1370 - Dijon, 1415), c. 1400. © 2009 Musée du Louvre / Erich LessingHaving begun as a heraldic painter at the court of the Dukes of Guelders in Nijmegen, Johan Maelwael predominantly worked for nearly twenty years in the service of Queen Isabelle of Bavaria in Paris and as a court painter and valet in Dijon to the Burgundian dukes Philip the Bold and his successor, John the Fearless. At the Burgundian court, Maelwael decorated flags, banners and armour, painted large murals, religious paintings and small devotional works, and colored and gilded sculpture. Around 1400 Johan Maelwael introduced his three talented nephews, Herman, Paul and Johan de Limbourg, as miniature painters in France.

The exhibition Johan Maelwael is organized with the exceptional support of the musée du Louvre and made possible by Fonds Beukenhorst/Rijksmuseum Fonds and an anonymous bequest.