Gigantic spiders, huge eyes, aluminium spirals in a majestic wingnut tree: this spring the Rijksmuseum presents Louise Bourgeois in the Rijksmuseum Gardens, a free outdoor exhibition of twelve sculptures spanning half a century of the artist’s oeuvre – from The Blind Leading the Blind in the late 1940s to 2003’s Crouching Spider.

Many of the works have never before been shown in the Netherlands, and this is the first exhibition to focus on Bourgeois's outdoor sculptures. Internationally, Louise Bourgeois (1911-2010) is one of the most renowned and important woman artists of the 20th century. She became famous all the world over for her monumental sculptures of spiders.

Louise Bourgeois in the Rijksmuseum Gardens 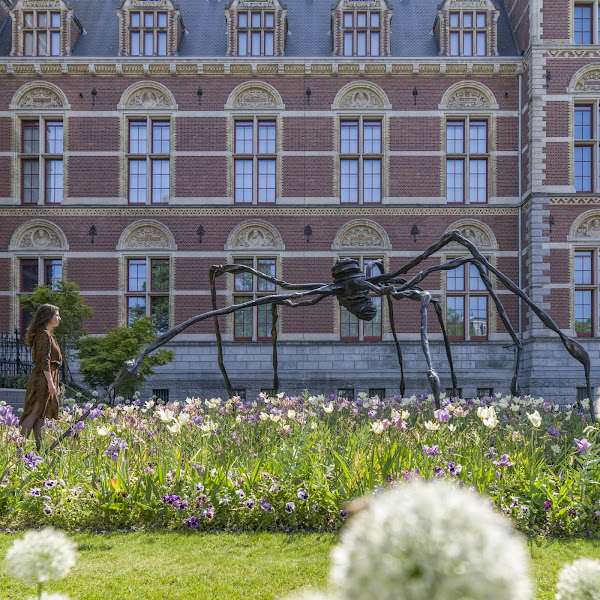 It is rare that an artist’s oeuvre so closely reflects his or her life that it seems to directly embody specific events and feelings. The twelve Louise Bourgeois sculptures, on display in the Rijksmuseum gardens from this spring, will form an intimate journal of recurring themes in the life and work of the artist. Several of the works relate to Bourgeois’s childhood, for example. The monumental works Spider (1996), Spider Couple (2003) and Crouching Spider (2003) can be seen as homages to her protective mother, a weaver. The high-gloss aluminium sculptures of Untitled (2004), hanging from the branches of the great wingnut tree, refer to her father’s habit of storing chairs by hanging them on roof beams in the attic of their home. Motherhood and Bourgeois’s own youth are recurring themes in the artist’s work, as are fear, friendship, materiality and the body. 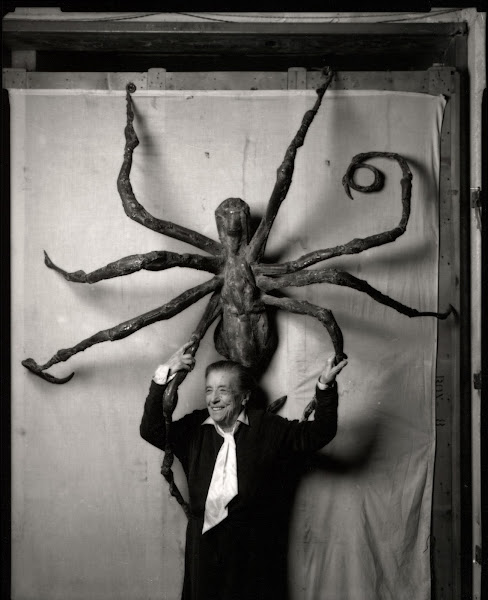 Louise Bourgeois in her Brooklyn studio in 1996 with her sculpture, SPIDER IV. Art: © The Easton Foundation / Licensed by Pictoright and VAGA at ARS, NY, Photo: © Peter BellamyLouise Bourgeois grew up in a suburb of Paris, in a family of antique tapestry dealers and restorers. While at the École du Louvre and the École des Beaux Arts she studied at the studios of artists such as Fernand Léger. In 1938, following her marriage to the American art historian Robert Goldwater, she emigrated to the United States. Because Bourgeois chose to distance herself from the prevailing movements in American art, it took a long while before her work was acknowledged. Despite her having solo shows from 1945 onwards, it wasn’t until the 1970s that her fame began to spread. The New York Museum of Modern Art’s Bourgeois retrospective in 1982 was its first for a woman artist, and this exhibition was soon followed by dozens more in museums such as Frankfurter Kunstverein, Centre Pompidou, the Whitney and the Guggenheim. Her works are now to be found in museum and private collections all around the world.

Louise Bourgeois in the Rijksmuseum Gardens is the seventh in a series of annual outdoor exhibitions. Previous editions in this series were devoted to the work of Henry Moore (2013), Alexander Calder (2014), Joan Miró (2015), Giuseppe Penone (2016), Jean Dubuffet (2017) and Eduardo Chillida (2018).

The exhibition’s curator Alfred Pacquement, former director of Centre Pompidou, is the author of the accompanying catalogue titled Louise Bourgeois at the Rijksmuseum. Published in a Dutch/English edition. It will be available from 21 June in the Rijksmuseum shop and in the webshop for €15.

Louise Bourgeois in the Rijksmuseum Gardens came about in close cooperation with Easton Foundation in New York, and is guest curated by Alfred Pacquement, former director of the Centre Pompidou in Paris. Admission is free to the exhibition, which runs from 25 May to 3 November 2019.