For the first time ever, the Rijksmuseum presents 170 Japanese prints from the Elise Wessels Collection, picturing Japan’s rapid modernization during the opening decades of the twentieth century. Alongside prints, the exhibition will feature kimonos and lacquerware from the Jan Dees and René van der Star Collection and posters on loan from the National Museum of Modern Art in Tokyo.

Japan at the turn of the 20th century 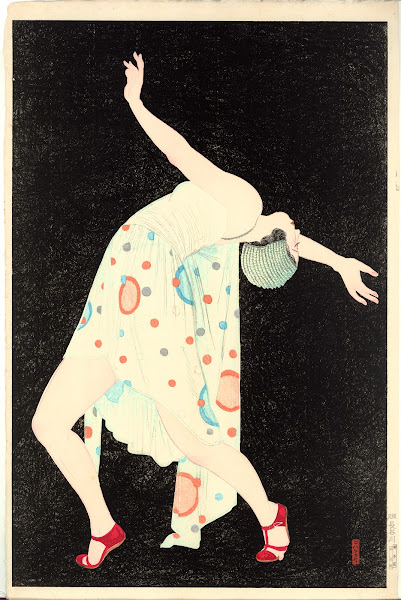 DANCER, Kobayakawa Kiyoshi (1899 - 1948). Kleurenhoutsnede op papier, 1932, P0140. Elise Wessels Collection – Nihon no hangaIn the early 1900s, Japan was booming. Its modern urban centres offered a fertile climate for burgeoning industries and gave rise to new forms of leisure. As in Europe and America, women were pushing back old boundaries, forging a new model of the ‘modern girl’. Alongside optimism, there was also a prevailing sense of nostalgia, fed by feelings of uncertainty. In this era of vast change, the past was glorified as an ideal.

With Japan in the midst of this whirlwind development, a devastating earthquake struck in 1923, ravaging the city of Tokyo and many towns and villages for miles around. Work immediately began on reconstruction of the country’s capital, putting the pace of modernization into an even higher gear. Synthetic fabrics made clothing, including kimonos, more affordable, and in their window displays the new department stores showcased the latest fashions to tempt shoppers. By 1930, Tokyo was a modern world metropolis that bore little resemblance to the city it had been just a few decades earlier.

Prints from this period offer an unparalleled window into this turbulent time. Japan already had a long tradition of printmaking, but the early twentieth century saw the emergence of two new artistic currents known as Shin hanga (‘new prints’) and Sōsaku hanga (‘creative prints’). Artists within these two movements each applied traditional woodcutting techniques in their own specific ways. Shin hanga artists used time-honoured methods and pictorial content that dovetailed with Japan’s centuries-old printmaking tradition, choosing subjects such as idealized female portraits and evocative landscape prints. Sōsaku hanga artists, by contrast, were avant-gardists with innovative ideas about the role of the artist and the creative process, whose subject matter revolved around the modern world, city life and industry. Weaving together these two strands of Japanese printmaking, this exhibition tells the story of a society in transformation. 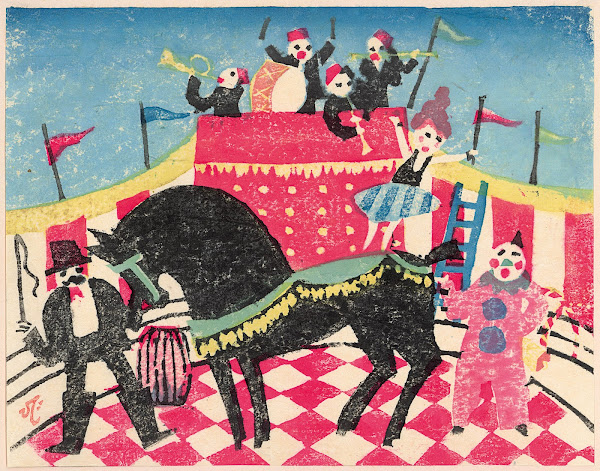 CIRCUS, Kawanishi Hide (1894-1965). Kleurenhoutsnede op papier, 1925, P0366. Elise Wessels Collection – Nihon no hangaDedicated to Japanese prints from the first half of the twentieth century, the Elise Wessels Collection is unique in the Netherlands and among the best in the world from this period outside Japan. The collection currently contains some 2,000 prints of exceptional quality, collected over a 25-year time span. With a large selection of prints in both the Shin hanga and Sōsaku hanga styles represented, the collection is furthermore unusual in offering a virtually comprehensive overview of Japanese printmaking during this period

To coincide with the exhibition, a catalogue is being published in Dutch and English. On Sunday 26 June, the museum will be hosting a special lecture by Curator Marije Jansen and an interview with Elise Wessels.

Japan: Modern. Elise Wessels Collection will be on view from Friday 24 June through Sunday 11 September 2016 in the Philips Wing of the Rijksmuseum.