This summer’s exhibition in the Rijksmuseum Gardens will feature nine giant sculptures by the Spanish Basque artist Eduardo Chillida (1924-2002). Chillida is considered to be one of the most important post-war innovators in sculpture. He became famous chiefly for his huge sculptures in steel.

This summer in the Rijksmuseum gardens: giant sculptures by Chillida

For the first time, nine of Chillida’s monumental outdoor sculptures will be exhibited together in the Netherlands. The works are on loan from the Barcelona Museum of Contemporary Art (MACBA), the Peggy Guggenheim Collection in Venice, the Eduardo Chillida-Pilar Belzunce Foundation in Hernani, Ordovas in London and a private collection.

Alfred Pacquement, former director of the Centre Pompidou and guest curator: Eduardo Chillida made a significant contribution to the renewal of sculpture in the 20th century and is one of the major figures of his generation. His work combines modern abstraction with traditional artisanal techniques for working materials, in particular forging iron. He frequently made his numerous and celebrated public works from large-format steel, using the material in a bold and spectacular fashion, with utter disregard for its innate constraints. Chillida believed that ‘To construct is to build in space.’

Chillida in the Rijksmuseum Gardens 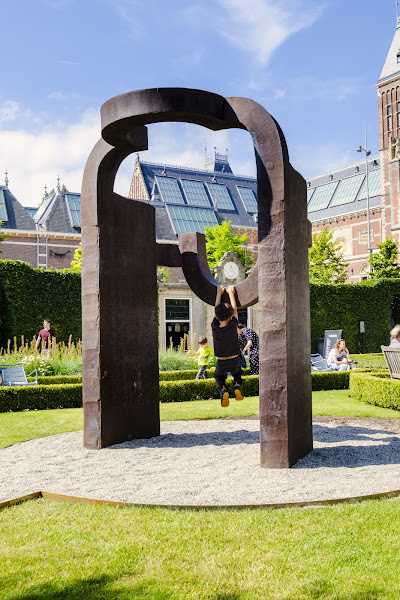 Eduardo Chillida, Arco de la Libertad, 1993. Chillida-Belzunce Family. Foto Johannes SchwartzThis exhibition gathers an exceptional group of large-scale works, from different periods, that exemplify his commitment to the complementary notions of fullness and emptiness, interior and exterior space, and gravity and balance. Highlights of the exhibition include Arco de la Libertad (1993) and Homenaie a Calder (1979). Chillida dedicated Arco de la Libertad to freedom, as symbolized by the empty space in the work. Homenaie a Calder is an homage to the US artist Alexander Calder and his Mobiles – Chillida played with the concept of gravity in a manner comparable to Calder’s. Chillida made a number of similar gestures to people with whom he felt an affinity, including the Spanish painter Manolo Millares and the couturier Cristobal Balenciaga. Both of these works will be on show in the Rijksmuseum Gardens. There will also be a sculpture from the famous Peine del viento series, in which steel ‘hair’ appears to blow in the wind. 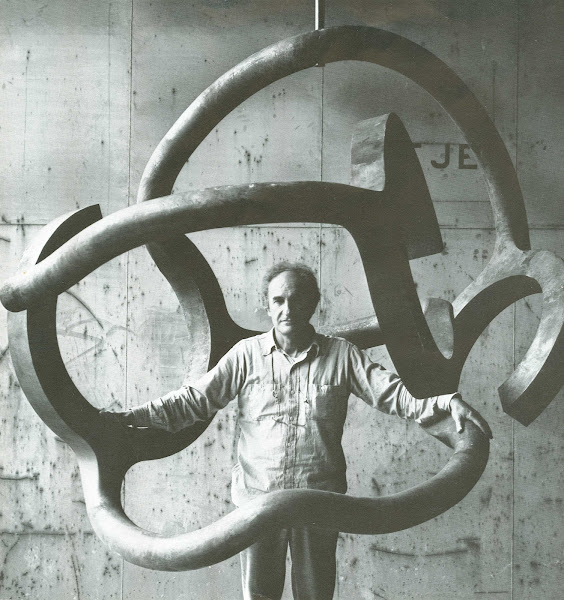 Eduardo Chillida with Homenaje a Calder, 1979, copyright photograph Claude Gaspari. And for the copyright of the work it is Zabalaga-Leku, Vegap, Madrid, 2018. Eduardo Chillida (1924-2002) began his career as a professional footballer, but when he was obliged to give this up due to injury, he first switched to a course in architecture before moving to Paris to study art.

Chillida was inspired by the Greek sculpture he saw in the Louvre. He initially made sculptures in traditional materials such as wood and alabaster. After his return to the Basque Country, he also began using steel. He was to become a skilled craftsman, able to forge sculptures on a huge scale. It was not long before he received recognition: in 1958 he was awarded the Grand Prize at the Venice Biennale. Chillida’s work is represented in the collections of museums that include the Museo Nacional Centro de Arte Reina Sofía, Kunstmuseum Basel, the Art Institute of Chicago and the Neue Nationalgalerie in Berlin.

Chillida in the Rijksmuseum Gardens is made possible by the Art Mentor Foundation Lucerne, Pon and the Rijksclub.