In celebration of the sixtieth birthday of Miffy the Rijksmuseum is presenting Dick Bruna. Artist, the first exhibition of the work of graphic designer and artist Dick Bruna (1927) in an international art-historical context. Prints and drawings of the artists who inspired Bruna: Henri Matisse, Fernand Léger, Willem Sandberg, H.N. Werkman and Bart van der Leck, will be on display alongside his own book covers, posters, collages and drawings. Naturally, Miffy is among the more than 120 items on show.

Miffy for the first time amid sources of inspiration 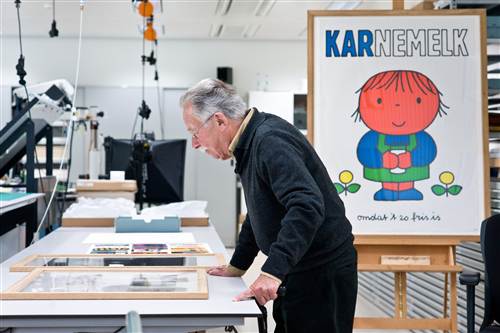 Dick Bruna at the Rijksmuseum Dick Bruna. Artist presents the highlights of more than a half century of graphic design work. Bruna’s distinctive style of clearly drawn lines, primary colours and two-dimensional abstract forms shines through in the book covers he designed for detective novels like The Shadow (Havank) and Maigret (Georges Simenon) from the Zwarte Beertjes editions, posters for A.W. Bruna & Zn. publishers and the Nederlandse Melkunie, and designs for Miffy.

In interviews, Dick Bruna has often mentioned artists who have influenced him, such as Matisse, Léger, Werkman and members of De Stijl, but for the first time the spotlight is on the art-historical thread that runs through his work. The Rijksmuseum has researched the art-historical connections to these other artists and selected works from its own extensive collection of prints to highlight Bruna’s affinities with other artists. By juxtaposing Bruna’s creations with the work of artists who inspired him, we instantly see these influences and inspiration. Bruna combines techniques from the colourful French avant-garde, such as cut-out and abandoning perspective, with the pared-down imagery and colour palette of De Stijl. At the same time, Picasso, Rietveld and architect J.J.P. Oud admired the simplicity and clarity of Bruna’s book covers and posters. 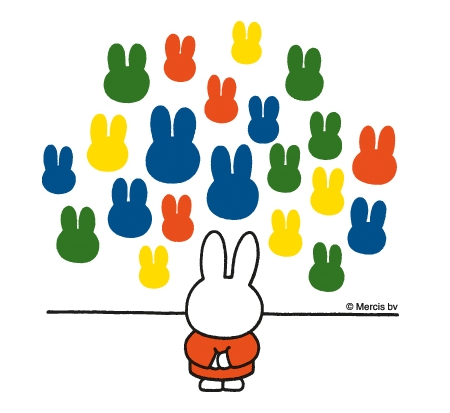 Illustration Dick Bruna © copyright Mercis bv, 1997With a total of 120 items on display, the exhibition also sheds light on the design process behind Miffy. Nowhere is Bruna’s craftsmanship, patience and skill at using colour to illustrate spatiality in two-dimensional space more evident than in his – at first sight simple - creation of the world-famous rabbit.

This exhibition has drawn from the long-term loan of 160 drawings, posters, prints and designs by Dick Bruna, which Mercis BV granted to the Rijkmuseum in spring 2011. The Rijksmuseum has also borrowed works from Centraal Museum Utrecht, Stedelijk Museum Amsterdam and Dick Bruna’s private collection.

More than 30 different items were designed specifically for the exhibition, depicting Dick Bruna’s book covers, graphic design work and Miffy | available from the Museum Shop and from the web shop.

The exhibition Dick Bruna. Artist can be visited from 27 August - 15 November 2015 in the Philips Wing of the Rijksmuseum.