With 170 treasures from China, Japan, India and Batavia, 'Asia > Amsterdam. Luxury in the Golden Age' tells the story of the excitement created by the Asian treasures that were shipped to Holland in the 17th century. Lacquer work, ivory, silver, silk, ebony, jewellery and enormous quantities of porcelain poured into Amsterdam, the then bustling ‘capital of the world’, to enrich the interiors of the increasingly prosperous Dutch bourgeoisie.

Luxury in the Golden Age

The exhibition 'Asia > Amsterdam. Luxury in the Golden Age' also presents many 17th century paintings: still-lifes and portraits of citizens who had themselves painted among their newly acquired items of Asian luxury. The exhibition is being organised in cooperation with the Peabody Essex Museum in Salem, USA. The loan items originate in such far-flung places as Moscow, St Petersburg, Versailles, London, Oxford, Madrid and Stockholm.

You do not need a special ticket for the Asia > Amsterdam Luxury in the Dutch Golden Age exhibition. You can visit the exhibit with your standard museum admission ticket. It is not necessary to select a date and time before your visit. More information about tickets 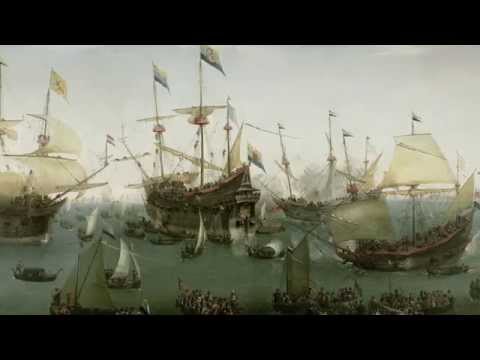 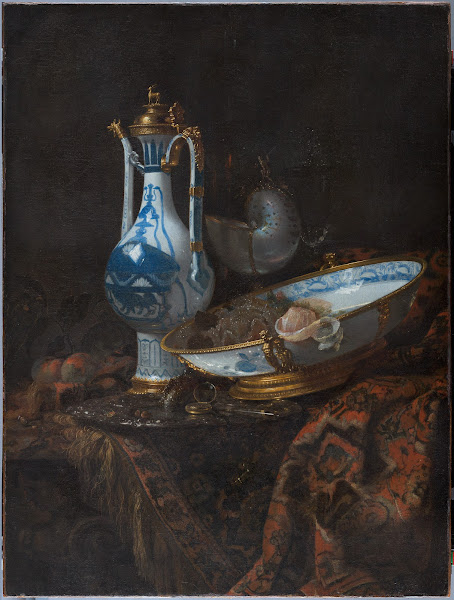 Made of special, precious materials and adorned with intriguing exotic patterns no one had ever seen before, the Asian treasures caused a sensation in Amsterdam. With their colour and richness, they aroused the curiosity and stimulated the imagination of the Dutch bourgeoisie. Very fine white porcelain with blue designs from China, boxes displaying excellent lacquer work and ivory from Japan, gem-studded jewellery from India and Indonesia, silk fabrics from Japan, remarkably shaped shells, black ebony, filigree from India... the Dutch gasped at the beauty of it all and enthusiastically incorporated these treasures into their hitherto more modest interiors. It was also remarkable that not only the super rich could afford to buy these items, but also a large part of the growing middle class. All that precious luxury was shipped to Amsterdam - at that time ‘the world’s harbour’ - by the ‘world’s first multinational’, the Dutch East India Company. 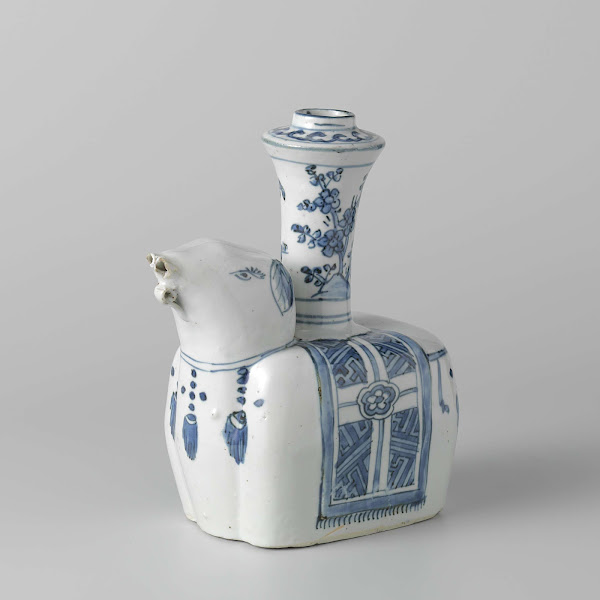 The Chinese blue-and-white porcelain was especially popular. It was much thinner, smoother and lighter than the earthenware made in Holland. The making of earthenware was soon refined in Delft, leading to the famous ‘Delft Blue’, which therefore has Chinese origins. Coloured Japanese porcelain first appeared ca. 1660, imported by Dutch East India Company officials returning from the Far East. This created another sensation and, 20 years later, the exclusive and therefore expensive Kakiemon porcelain was the big favourite among the Dutch elite. The exhibition shows many excellent examples of porcelain bowls, dishes, cups and jugs with - as the pièce de résistance - a pouring jug with a golden lid from ca. 1640, bearing the coat of arms of its proud owner.

The Dutch were equally impressed with Japanese lacquer work, which was rarer and therefore more precious due to the complex and time-consuming production process. In the 17th century, a lacquered cabinet would cost about 180 florins, while a well-paid Dutch East India Company official made about 54 florins a month. Asia > Amsterdam shows a range of lacquer work of the highest quality, including two large lacquered chests. One was acquired by the Rijksmuseum two years ago and is heavily adorned with inlaid gold, silver, mother of pearl and even crystal. The other chest was specially made for the wife of Governor-General Van Diemen and bears her name. The Dutch were only able to acquire such exceptionally rare treasures thanks to their position of trust in Japan. In this exhibition never before so much lacquer work of such high quality has been seen in the Netherlands. 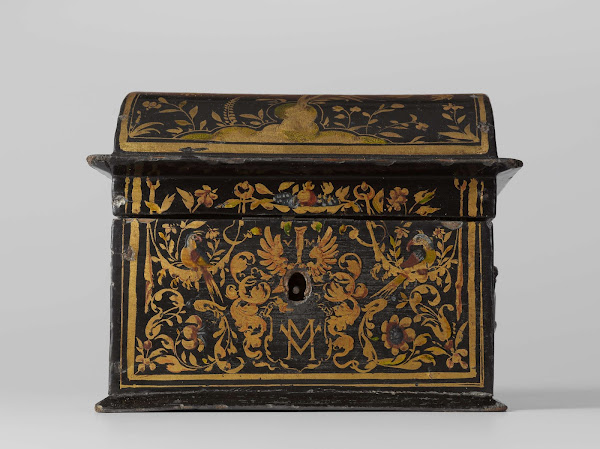 Asian interiors traditionally had little furniture and the furniture Dutch East India Company officials took with them failed to withstand the tropical climate. The Dutch therefore had furniture made from local types of wood. Asian furniture makers were shown examples of Western furniture, which resulted in Dutch cabinets produced from a combination of Eastern and Western materials and patterns. They were sometimes inlaid with ivory, as in the case of the extremely rare crib decorated with Hindu illustrations. Ivory was also used in other treasures, such as small chests from Ceylon, one of which was decorated with a depiction of Adam and Eve under assignment from a local Dutch East India Company official.

However, the shapes of Asian furniture were not always suitable for Dutch interiors and so had to be adjusted accordingly. Low lacquered cabinets were placed on a base, and sometimes Dutch furniture makers even went as far as sawing them to size and reusing them in a new cabinet. However, Dutch interiors also changed enormously under the influence of the treasures from Asia. Porcelain was displayed on specially designed shelves and consoles. Imported silk and cotton introduced much more colour and variation in the shape of bedspreads, curtains and wall tapestries. 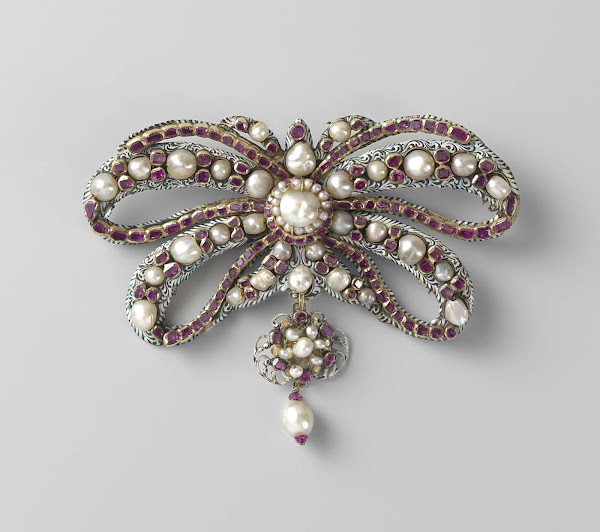 Not only diamonds, gems, filigree, mother of pearl, silver, silk, chintz and fans, but also pepper, tea and exotic animals such as parrots and monkeys were all shipped to Amsterdam. Naturally, Dutch citizens wanted to immortalise themselves among all that luxury. From the beginning of the 17th century, Dutch artists therefore started to incorporate these treasures into their paintings. Clara Peeters, Floris van Dyck, Pieter Claesz, Willem Claesz. Heda and Willem Kalf were masters at depicting the texture of shiny porcelain. Men who wanted to be truly fashionable had their portraits done wearing a silk ‘Japanese skirt’, which was a long loose-fitting silk coat, such as the one worn by Amsterdam pharmacist Johannes Hudde in the portrait of him by Michiel van Musscher in 1686. Those who were also wealthy enough to serve Chinese tea from a Chinese teapot into Chinese cups, all on a Japanese lacquered table, had truly brought Asia to Amsterdam.

The exhibition “Asia > Amsterdam” was made possible thanks to the Mondriaan Fund, ING and the Rijksclub and is co-organized by the Peabody Essex Museum, Salem, Massachusetts and the Rijksmuseum.

The exhibition Asia > Amsterdam will be on view in the Peabody Essex Museum in Salem, US from February 27 till June 4, 2016.