A parade of tragicomic characters, a tower with stories and a brilliant white tree can all be admired this summer in the Rijksmuseum Gardens. From 1 July, twelve monumental sculptures by the French artist Jean Dubuffet will be on display. The sculptures, characterised by the recognisable bright white, red and blue patterns, come from Paris, Lisbon, New York and London.

Man amongst culture and nature

The sculptures have been selected to represent the theme of Dubuffet’s work, namely man amongst culture and nature. Sculptures with human figures are strongly represented in the exhibition, with both single and grouped figures. The monumental, almost five metres high Arbre biplan from Lisbon and the four metres high Tour aux Récits from London, represent nature (the tree) and culture (architecture), respectively. These two sculptures will be flanking the bicycle passage at the Stadhouderskade. In the Atrium of the Rijksmuseum, visitors can sit on a bench (Banc Salon) with a number of Cerfs volantes (Kites) hovering above. All sculptures in the exhibition date from 1968 and later. Many of the monumental sculptures have never before been on display in the Netherlands.

In the 50s and 60s, Dubuffet was best known as a painter, draftsman and graphic artist. Just occasionally he also created sculptures. After David Rockefeller commissioned Dubuffet to create a sculpture for the Chase Manhattan Bank in New York, in the last phase of his life he started making large sculptures and his sculptural output expanded. 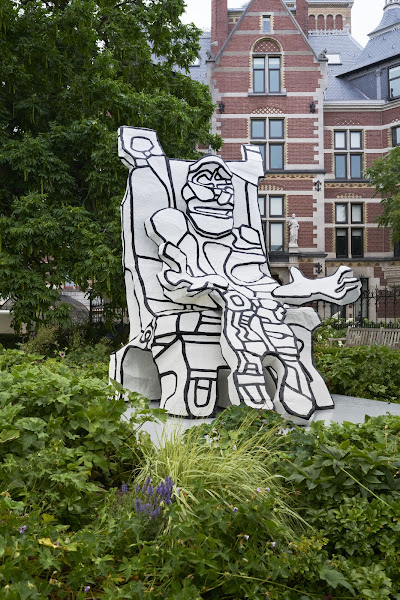 Le Deviseur I (1969–2006). Collectie Paul Schärer. ©2017 Fondation Dubuffet, Paris / Pictoright, Netherlands. Foto Johannes SchwartzIn the late 40s and the 50s he played a crucial part in the appreciation of art produced by psychiatric patients, children and self-taught painters (naive painters), nowadays also referred to as ‘outsider art’. Dubuffet called their work ‘art brut’, raw art. From 1945 he started to assemble his own collection, out of which he also organized exhibitions. His collection is now housed at the Collection de l’art brut in Lausanne. The non-conformist and untainted creativity and the expressiveness of their images were a source of inspiration for artists who were looking for innovation in the 20th century, such as the artists of the Cobra Group in the Netherlands (Constant, Corneille, Karel Appel). In the 60s, Dubuffet’s work gradually became more graphical in nature and the occasional human and animal figures were replaced by complex scenes made up of contour lines around ‘cells’ in bright colours, as can be seen at the exhibition in the Rijksmuseum Gardens.

The exhibition is accompanied by a catalogue written by the exhibition’s curator, Alfred Pacquement, former director of the Centre Pompidou, and Sophie Berrebi (Art History professor at the University of Amsterdam): Jean Dubuffet in the Rijksmuseum Gardens. Available at the Museum Shop and gazebo. Price €15 (NL/EN)

Following on from Henry Moore (2013), Alexander Calder (2014), Joan Miró (2015) and Giuseppe Penone (2016), Jean Dubuffet in the Rijksmuseum Gardens is the fifth in a series of five open-air exhibitions in the gardens. The exhibition is made possible in part by the BankGiro Loterij participants and the Rijksclub.

Create your own masterpiece inspired by Dubuffet’s sculptures. For children 4 years and older. Join us daily between 1 pm and 4 pm in the tent in the gardens. From 8 July to 3 September. Participation is free.

Dubuffet in the Stedelijk Museum Amsterdam

Simultaneously with the exhibition at the Rijksmuseum, the Stedelijk Museum in Amsterdam is presenting a selection of its own extensive collection of Dubuffet’s art: Jean Dubuffet: The Deep End assembled by guest curator Sophie Berrebi (Art History professor at the University of Amsterdam). The exhibition runs from 30 June – 24 September 2017. stedelijk.nl/persberichten/jean-dubuffet-the-deep-end

Dubuffet in the Rijksmuseum Gardens is the fifth summer exhibition in a series of open-air exhibitions, made possible in part by BankGiro Loterij participants and the Rijksclub.