The British government today granted an export license for the painting 'A Dutch girl at breakfast' by Jean-Etienne Liotard which the Rijksmuseum has recently purchased from a private collection in which it had remained for more than 240 years. 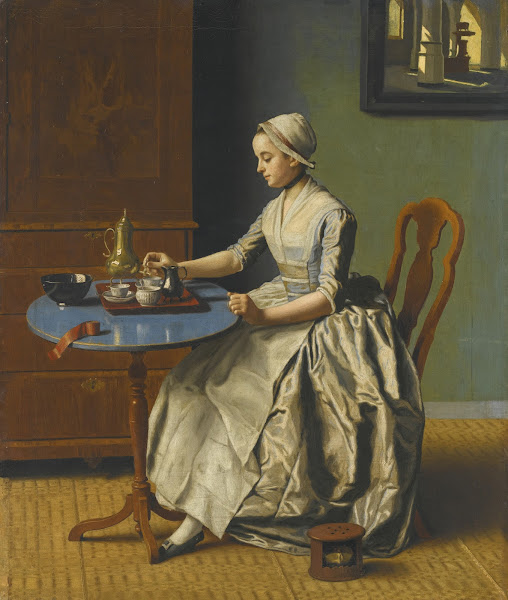 Jean-Etienne Liotard (1702-1789) 'A Dutch girl at breakfast', c. 1756-57'A Dutch girl at breakfast' is an intimate ode to Dutch Golden Age painting. The peripatetic Genevan pastellist Jean-Etienne Liotard (1702-1789) created the work in the style of Dutch seventeenth-century masters during a long sojourn in Holland around 1756. As one of his few oil-paintings, his Dutch girl at breakfast is an important addition to the famous group of pastels by Liotard that have been in the Rijksmuseum since 1885. This stunning new acquisition will be shown in the Rijksmuseum’s Gallery of Honour from mid-January.

Taco Dibbits, General Director of the Rijksmuseum: 'A Dutch girl at breakfast' radiates the same atmosphere of peace and simplicity as Vermeer’s Milkmaid. In this sensitive representation, the painter allows us to get very close to his subject. As the girl carefully opens the tap of the coffee-pot, she won’t allow herself to be disturbed by the millions of visitors who will come to see her. We are extremely grateful to the funds and private donors who made it possible to acquire this masterpiece for The Netherlands.

With the support of the BankGiro Loterij, Rembrandt Association through its ‘Nationaal Fonds Kunstbezit’, Mondriaan Fund, VSBfonds, Rijksmuseum Fonds and many private donors, the Rijksmuseum was able to purchase this work at auction in London for nearly € 5.2 million (commission included).

A Dutch girl at breakfast is one of Jean-Etienne Liotard’s most beautiful works. In it, he reveals himself as one of the earliest 18th-century artists from abroad to put his fascination with Dutch painting of the 17th century into practice. On this small canvas (47 x 39 cm) he portrays a young woman sitting in a typically Dutch interior. All the characteristics of Dutch 17th-century “genre” are present: the everyday scene, the intimate ambiance, the sober colours, the sophisticated rendering of textures, and the painted church-interior in the background. Nevertheless the furnishings and tableware are all from Liotard’s own time. The mise-en-scène is strongly reminiscent of the well-known interiors of his predecessors Johannes Vermeer, Gerard Dou and Frans van Mieris.

After long sojourns in Vienna, Paris and London, where he enjoyed great success as a portraitist, Liotard travelled to Holland in 1755 to pursue this lucrative career. A Dutch girl at breakfast was clearly inspired by his experiences in the country. As a connoisseur of Dutch Golden-Age painting he also managed to assemble a collection of over 60 old-masters. In 1756 at Amsterdam he married Marie Fargues, born and bred in Holland but a Huguenot like himelf. His splendid pastel portrait of her is in the Rijksmuseum’s collection. Their eldest son later settled in Amsterdam, bringing many of this father’s works with him.

Eighteenth-century European painting is not particularly well represented in the Netherlands. The subject of this painting, the way it is presented and the work’s close historical connection with the Netherlands will give iconic status to A Dutch girl at breakfast within the Dutch national collections. After its presentation in the Gallery of Honour it will take pride of place in the Rijksmuseum galleries for the arts of the 18th century. It will also be reunited there with the remarkable group of Liotard’s pastels donated by his Dutch descendants at the end of the 19th century. Only some 30 oil-paintings by him are known - as opposed to 540 pastels. Genre-pieces by him are even scarcer, though this is a type of art for which he is well known, especially in works such as The Belle Chocolatière at Dresden. With this acquisition the Rijksmuseum’s representation of Liotard’s oeuvre has been considerably strengthened.

Liotard appears to have kept the A Dutch girl at breakfast for himself until 1774, when he included it in a sale of his collection in London. It was bought there by his principal British patron, the 2nd Earl of Bessborough (1704 – 1793), with whose descendants it has remained until now.

The purchase of the painting has been made possible by: