The Night Watch is scanned successively by three different cameras. All three can detect a different band of the electromagnetic spectrum. Among other things this provides us with a mass of information about the pigments that Rembrandt used in the painting. In addition, the cameras reveal the underlaying sketch layers or modifications.

The technique that is used is called RIS for short. It stands for Reflectance Imaging Spectroscopy. NASA has been using this technique since the 1970s to photograph minerals on Mars and determine their chemical composition. RIS is now a standard research technique for paintings. 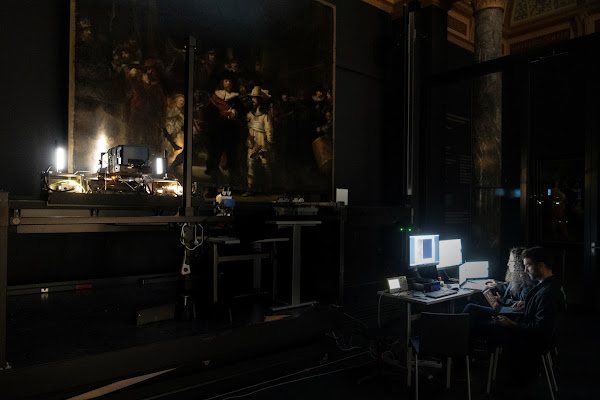 The scanning of The Night Watch with one of the cameras is done at night, after the museum has closed. That is because the scans have to be made in the dark. Only the light from the lamp being used for the scans is allowed to fall on the painting. That prevents light from the museum galleries or outside from interfering with the results. The entire surface of The Night Watch is being mapped with this technique.

How does RIS work?

The painting is illuminated with natural light. That light, some of which is visible to us, is part of the larger electromagnetic spectrum. That includes the invisible infrared, radio or X-ray radiation. Each of the three cameras captures a different part of the electromagnetic radiation and supplies additional information. Each kind of material in The Night Watch absorbs and reflects the radiation differently, so we can distinguish them from each other. In this way pigments and binders over the entire surface of the painting can be characterised and mapped. For example, RIS can distinguish between different pigments that contain copper, iron and organic lakes. RIS can also measure the quartz in the ground layer. 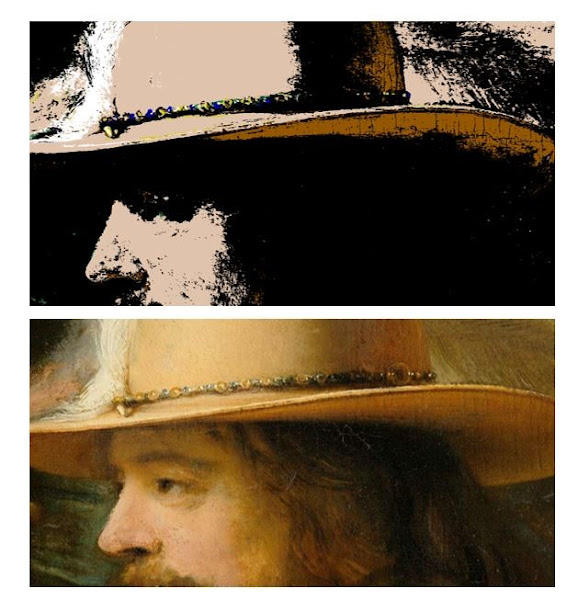 Boven zie je de RIS scan, onder het corresponderende gedeelte van het schilderij.The illustration below is the initial scan of a detail of The Night Watch. You are seeing part of the head of Lieutenant Willem van Ruytenburch. The top image shows the distribution of various pigments identified on the basis of their chemical composition. The light beige areas match the mineral goethite. It is a mineral containing iron that is found in the pigment yellow ochre. Rembrandt used it in skin tones and the man’s yellow hat. That is clearly visible in the image at the bottom. You can also see that he used the yellow ochre pigment for the hat but not for the hair.