The first Rijksstudio Award, commissioned by the Rijksmuseum, was taken home by the designer duo Asnate Bockis (1984) and Rogier Arents (1987). They were the resounding winners, selected unanimously from 820 entries by an international jury of designers, creatives and museum directors. The two young designers, graduates of the Design Academy Eindhoven, produced a makeup line inspired by five women from the Rijksmuseum collection. The winners were announced at a festive ceremony in the Rijksmuseum yesterday. 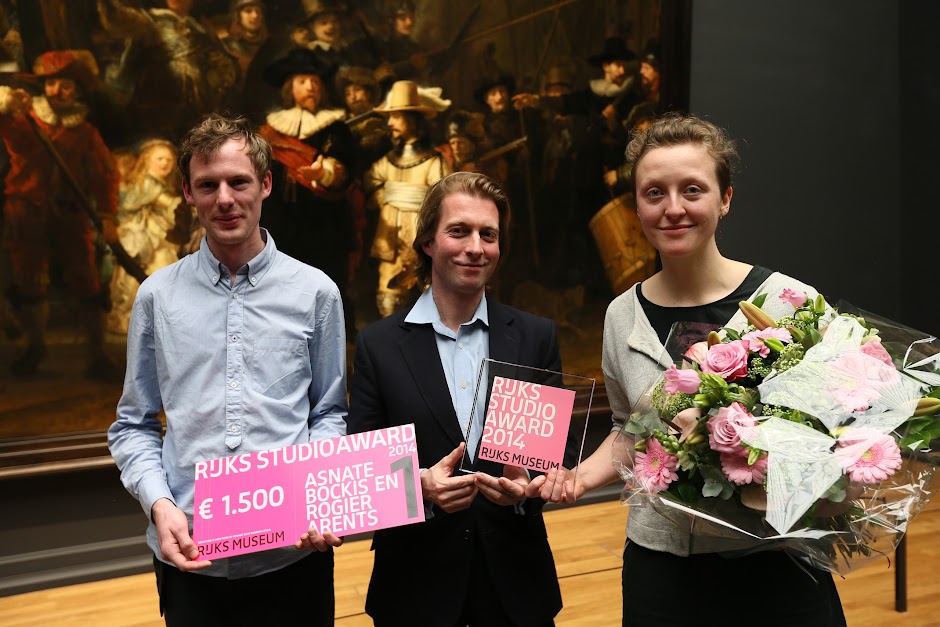 The makeup line Rijks Muse is inspired by the colour palettes in five women’s portraits from the Rijksmuseum collection, including Vermeer’s Woman in Blue Reading a Letter (1633) and Portrait of Alida Christina Assink (1833) by Adam Kruseman. The product line is based on three artistic techniques as they can be used to render human expression: sculpture (foundation), drawing (make-up pencils) and painting (eye shadow box). The designers say the name represents women in art: “the woman in art is like a muse.”

The winning design will be on display at the Rijksmuseum from 17 April to 22 July 2014, along with the works of the other nine finalists. The museum is also looking into the possibility of producing the Rijks Muse line for sale in its Rijksshop.

“It is a fabulous idea backed by a strong design, good presentation and a very fitting name.” Taco Dibbits, jury chair and Director of Collections at the Rijksmuseum

Design competition: Make your own Masterpiece

The Make your own Masterpiece design competition was established on 1 November 2013 to celebrate the one-year anniversary of Rijksstudio. People were invited to participate in any conceivable art form (design, autonomous art, applied arts, photography, video), as long as their creation was inspired by an item in the Rijksmuseum’s collection.

With Rijksstudio, 150,000 artworks are presented in close-up for you to zoom in on, to touch, to “Like”, and to use in your own creations. Collect your favourite works in your own Rijksstudio, share them with friends or download them free of charge and make your own artwork. The stunning images in Rijksstudio are entirely copyright-free: you can use them for either private or commercial purposes.

Rijksstudio was created by Fabrique and Q42, in collaboration with Irma Boom Office.

With thanks to our Rijksstudio partner: BankGiro Loterij

Photograph is made by Paul Ridderhof