To mark the three hundredth anniversary of Maria Sibylla Merian’s death, the Rijksmuseum presents an ode to the German-born artist and scientist.

Merian was fascinated by plants and insects, studied them intensively and even travelled through Suriname to record the metamorphoses of caterpillars into butterflies. The presentation includes two publications by Merian and thirteen photomontages by art historian Ella Reitsma inspired by Merian’s work. The photomontages attest to her great interest in early botanical drawings and old plants that still survive and bloom in gardens today.

An Ode to Maria Sibylla Merian runs from 24 March to 13 June 2017 in the Rijksmuseum’s late seventeenth-century print room. 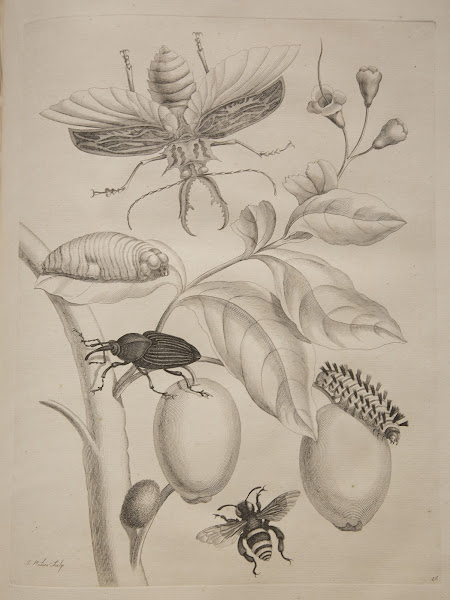 De Europische insecten... na 't leven geschildert, en in print gebragt door Maria Sibilla Meriaen : hier is nog bijgevoegt een nauwkeurige beschrijving van de planten, Maria Sibylla Merian, 1730. Collectie RijksmuseumIn 1691 Maria Sibylla Merian (1647-1717) moved to Amsterdam and lived in a house close to where the Rijksmuseum now stands. There she bred insects and followed their metamorphoses in order to draw them and describe them as accurately as possible. She produced a number of publications, among them a book on the metamorphoses of insects in Suriname. Merian was one of the first people to show that all insects, not just some, undergo a change and that there is a close relationship between plants and animals.

In the late seventeenth-century print room, the Rijksmuseum shows two important publications by Maria Sibylla Merian, one by her grandfather Theodoor de Bry (1528-1598) and a work by her stepfather Jacob Marrel (1614-1681).

Art historian Ella Reitsma specializes in the work of Maria Sibylla Merian and her daughters. Under her professional name Ella Snoep, she makes photomontages in which she combines early botanical drawings and prints by Merian and others with plants from her own garden. In her latest book Ode to Maria Sibylla Merian: Early Flowers she focuses on Merian at the start of her career, when she devoted herself to botanical drawings. Reitsma earlier wrote the book Maria Sibylla Merian & Daughters: Women of Art and Science that accompanied the exhibition of the same name in the Rembrandt House in Amsterdam and the Getty Museum in Los Angeles in 2008.