'The Conspiracy of the Batavians under Claudius Civilis' (1661-62), originally Rembrandt’s largest and most prestigious painting, is now on view at the Rijksmuseum in a very rare showing. Owned by the Royal Swedish Academy of Fine Arts, the painting has been at the Nationalmuseum of Art in Stockholm for more than 150 years, leaving Sweden only twice in that time, in 1925 and 1969. Both of those occasions were for showings at the Rijksmuseum. The masterwork will be displayed in the Gallery of Honour starting 21 March 2014 in commemoration of the 400-year anniversary of bilateral relations between Sweden and the Netherlands. 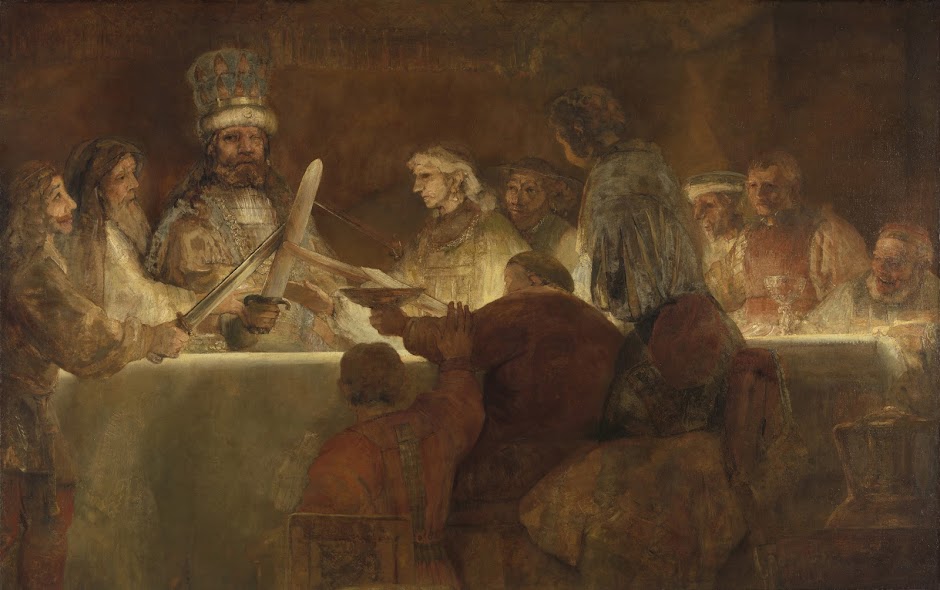 Rembrandt van Rijn, 'The Conspiracy of the Batavians under Claudius Civilis' (1661-62). The Royal Academy of Fine Arts, Sweden

Commissioned for the new Town Hall in Amsterdam

Rembrandt painted The Conspiracy of the Batavians Under Claudius Civilis, Claudius Civilis for short, in 1661-1662 under a commission from the burgomasters of Amsterdam. The enormous canvas, originally 550 cm high and 550 cm wide, was far and away the largest, most prestigious painting of his long career. The work was intended to be part of a series of eight equally large paintings depicting Batavian history to be hung in the new Amsterdam Town Hall (now the Royal Palace Amsterdam).

Originally one of Rembrandt’s former pupils, Govaert Flinck, was commissioned to paint the entire group, but when he died prematurely in 1660, all he had completed was an initial painted sketch. Rembrandt was then asked to depict the opening scene of the series: the moment when, at a meal in a sacred grove, the Batavian leader Claudius Civilis addresses other chieftains and brave warriors and calls on them to swear an oath against the Romans. Claudius Civilis is painted in a full frontal view, in opulent attire, with an elaborate headdress and… one blind eye. He is clearly the central figure of the narrative. 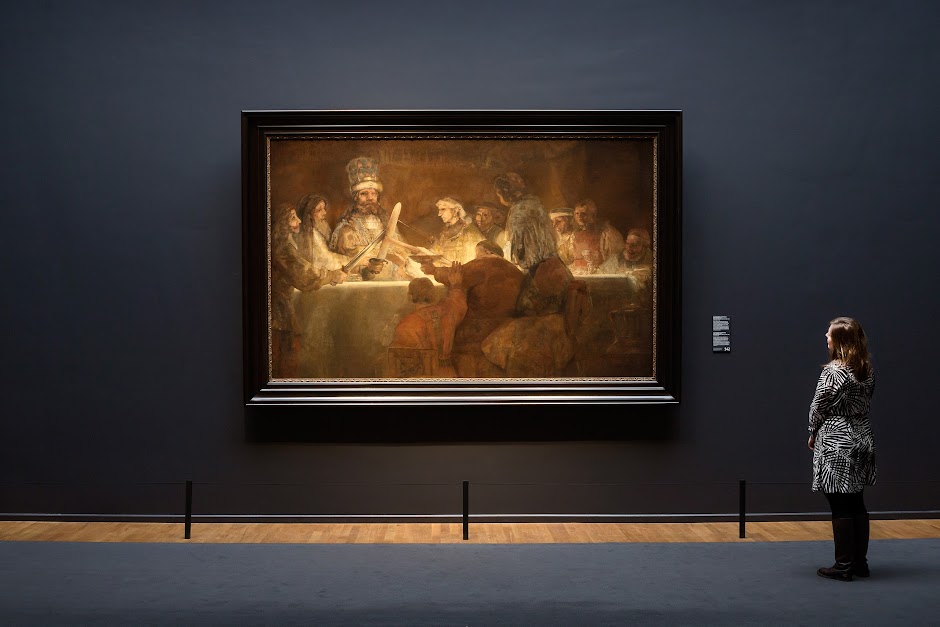 The Batavians lived in the Netherlands at the start of the Christian era and in 69 A.D. they famously revolted against the Romans, who ruled northern Europe. In the early 17th century the Dutch liked to compare themselves to these ‘forefathers’, casting their own struggle for freedom from Spain in the light of the Batavian revolt against Rome. It was in this vein that the city rulers chose to decorate the new Amsterdam Town Hall, an awe-inspiring symbol of their newly acquired independence, with this series.

Removed and cut down in size

What we know is that in July 1662 the painting hung in the lunette in the south-east corner of the great hall of the Amsterdam Town Hall. A month later, a discussion took place between Rembrandt and his patrons, after which Rembrandt retrieved the painting to make changes to it. We do not know what specific changes the burgomasters desired, but Rembrandt’s painting was never returned. It was probably Rembrandt himself who cut the painting down to 196 cm by 309 cm, less than a year after its completion, leaving the central, most narrative fragment to survive to this day. Nearly 75 per cent of the original surface was destroyed. We only know what the original composition was from a drawing in Munich.

Until 1662 we don’t know where the painting has been. The canvas was purchased at auction in 1734 by the husband and wife Nicolaas Kohl and Sophia Grill, who lived in Amsterdam. Over thirty years later, in 1766, it was most likely taken to Stockholm. In 1798 the work was donated to the local Royal Swedish Academy of Fine Arts by the widow of Henrick Wilhelm Peill, Anna Johanna Grill, in memory of her deceased husband. By that point, it had already hung at the Academy on loan for some time. In 1865 the monumental canvas was given to the National Museum of Art on long-term loan. With its departure to Sweden, one of the high points of Rembrandt’s painted oeuvre was all but forgotten in the Netherlands for nearly a century. By coincidence, the painting was only rediscovered and identified in Stockholm in 1892.

In 1925 Claudius Civilis returned to Amsterdam for the first time in more than 150 years for an historic exhibition in the Rijksmuseum celebrating the 650-year anniversary of the city’s founding. The second – and last – time it came to the Rijksmuseum was in 1969 for the exhibition commemorating the 300-year anniversary of Rembrandt’s death. Now, 45 years later, an extensive renovation of the Nationalmuseum in Stockholm has made it possible for the Rijksmuseum to put the world-renowned painting on temporary display once more for an extremely rare showing.

Credit line: Rembrandt van Rijn, The Conspiracy of the Batavians under Claudius Civilis (1661-62). The Royal Academy of Fine Arts, Sweden