From today three works by the celebrated British artist Anish Kapoor will go on show in the Gallery of Honour at the Rijksmuseum to 3 April 2016. The three painted reliefs created from layers of red and white resin and silicone evoke images of bloody, sinewy lumps of meat. These extraordinary visceral works will enter a visual dialogue with Rembrandt’s late works, such as 'The Jewish Bride', 'The Syndics', 'Titus Dressed as a Monk' and 'Self-Portrait as the Apostle Paul'. 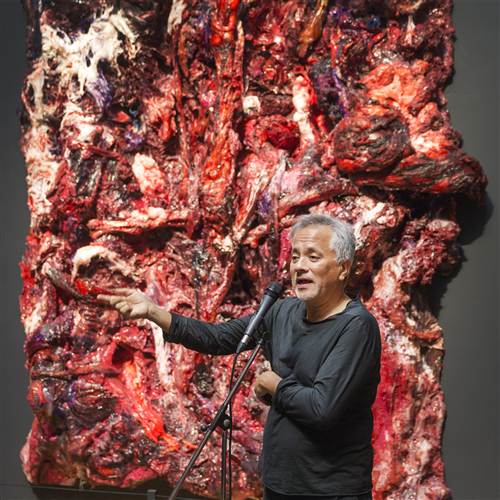 Internal Object in Three Parts, 2013-2015 (detail). © Anish Kapoor; Courtesy the artist & Lisson Gallery The reliefs, entitled Internal Object in Three Parts, mark Kapoor’s return to painting, which he combines with a quest for the raw spaces in both body and psyche. However, Kapoor’s works also tie in with the painting tradition of Rembrandt, Soutine and Bacon, raising themes such as violence, trauma, and social and political unrest. From his earliest days as an artist, he created two-dimensional works in ink, acrylic and oil paint, gouache, pigment and earth on both paper and canvas. These new works recall his mechanised installations such as My Red Homeland (2003), Svayambh (2009) and Shooting into the Corner (2009). Finally, Internal Object in Three Parts shows Kapoor reflecting his interest in the Greek legend of the satyr Marsyas. Marsyas challenged Apollo, the god of music, to a musical duel, which Marsyas lost. Apollo then tied Marsyas to a tree and skinned him alive.

Anish Kapoor (b. Bombay 1954; currently residing in London) is one of the most influential sculptors of his generation. He often works with reflective surfaces using different materials. His immense artworks in particular (Levathian, Grand Palais, Paris, 2011) are world renowned. Kapoor draws on myths from ancient times (India, Egypt, Greece, Rome) but also works with 20th century themes. This summer, Anish Kapoor made the news with his largest exhibition to date in the gardens of the castle of Versailles. His work ‘Dirty Corner’ was covered in graffiti within days of going on display.”